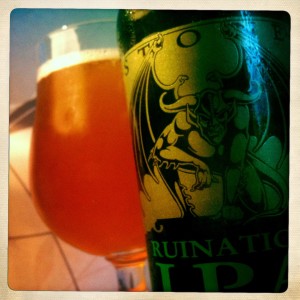 “A liquid poem to the glory of the hop!”
Poem?
This is an old Hardcore Punk lyric, not a poem.
This is Minor Threat in liquid form.
Which is rather ironic as Minor Threat were a Straight Edge band and so didn’t drink at all.
But it has that same sweaty, shouty, in your face feeling.
The smell, the stench, is oily sappy wood and fruit juice.
You get a glimpse of the malts, but it’s only a glimpse as they act like a shady manager lounging in the smoky back room wearing a knackered old jacket made of toffee and biscuits.
But who cares about malts, this is all about hops.
They’re raw and massive and they scream in a big husky oily voice.
They yell pine resin, redwood leaves, floods of grapefruit juice and their latest album is entitled, “Killed By Mandarin Pips.”
And it rocks.
A poem? Straight edge?
My eye.