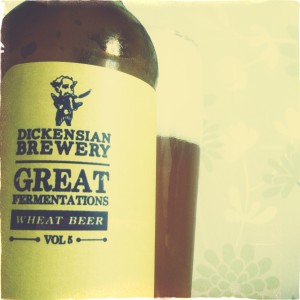 I had no idea that The Dickensian Brewery are based in Shropshire, and not only that but they’re a mere fifteen minute drive away from my folks’ house.
I shall be visiting next time I’m over that way.
Especially as, judging by this beer at least, they’re pretty good too.
Maybe not the most exciting beer in the world, Great Fermentations does everything you want from a Wheat Beer, and does it well.
Pouring a good honey amber with a big fluffy head, the smell is spicy baked banana bread.
There’s a load of fried bananas and all spice in the malts too, as well as some sticky toffee and a well baked baguette.
The beer pops and sparkles with life, and the hops are herbal and fresh, bitter lemon rind and greengage sharp.
As for the finish, its honey sweet and slightly sticky, but has a dry enough edge to stop the beer becoming too sugary.
I’m looking forward to my other bottles now.
Source: Best Of British Beer

One Response to The Dickensian Brewery Great Fermentations (4.6%)