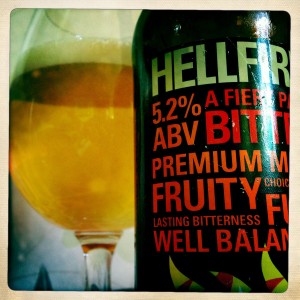 I really wanted this to be much better than it is.
It’s not a bad beer as such, it’s just kind of, well, OK.
It’s a Pale Ale calling itself a Pale Bitter, but that’s not a problem.
It’s a light straw colour.
It smells of apple cores, nail varnish and hay.
Its malts are biscuits and caramel, and its hops are bitter sapling wood, resinous pith washed in lemon juice.
Its finish is dry and bitter sweet.
But it’s a long way from the, “Fiery Pale Bitter,” that it declares itself to be.
Put a couple of pints of it in front of me on a night out and I’d happily drink them, but there’s something lacking in here, something I can’t quite put my finger on.
It’s just a bit, well, OK.