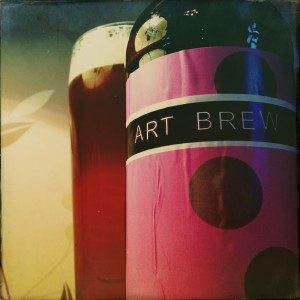 So, Art Brew sell out and make a Golden Ale.
And I Thought they were so much cooler than that.
What the hell were they thinking?
Oh.
Hang on.
Now Beer says it’s a Golden Ale and it pours a golden colour.
But this is not your average Golden Ale.
This is some weird Guerilla (Beerilla?) warfare of a Golden Ale.
The smell is a massive toffee, lavender and bubble gum ball.
The malt is wholewheat bread and caramel and burned toffee flecked with black pepper.
And then there are hops.
Miles and miles of hops.
Columbus and Centennial as far as the eye can see.
So many hops that not only are they a hefty bitter citrus tang, zest, pithy and dry, but they BURN too.
You can feel them on your lips as the moisture is dragged from your face.
Art Brew have taken an MOR Golden Ale – A drink that is generally the beer equivalent of Hotel California – and they’ve broken it, messed around with its battered remains and put it back together in some weird Frankensteinian experiment.
Art Brew sell out?
Never!