These notes were written while drinking Pissenlit (French for Dandelion, and also where from the old English name for the plant, “Piss-The-Bed” probably derives).
In the cold light of day, or rather the cold dark of six in the morning, I may have been feeling a little emotional last night.
However, this beer is absolutely brilliant and so I’ll publish my notes as I found them when I woke up. 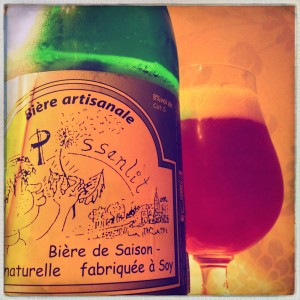 Just like heaven.
This might just be the best beer I have ever had.
It certainly comes close.
Pissenlit is a Saison, but it’s nowhere near as simple as that.
It’s an irreverent love letter to beer.
It’s a love letter full of foul language.
It’s a pissed up, bolshy, charismatic drunk of a beer.
The label is so badly designed it becomes high art.
Like record covers by Wham-O, Crank Sturgeon, or anything on the Ecstatic Peace label, it’s so ugly you can’t help but fall in love.
The beer is a deep amber and the smell is honeyed horse shit, sweet and sticky, grassy and unappetisingly delicious.
Taking a swig is sucking on damp straw and toffee, a midden full of Werthers.
It’s sweet and bitter, sour in the corners, nutty, woody.
There’s mushrooms and pomegranate and there’s the distinct feeling of the blackboard rubber my junior school teacher would hurl if you spoke.
In fact Pissenlit is so earthy and so beautifully ugly I’m going to stop trying to describe it.
All I’ll say is that if I had to only drink one beer for the rest of my days, it would probably be this one.