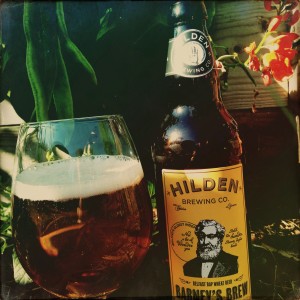 Another beer from Sainsbury’s 2013 Great British Beer Hunt, Barney’s Brew is a “Belfast Bap Wheat Beer” named in honour of Barney Hughes, a baker and philanthropist local to the the brewery.
On taking my first sip I thought, “Oh, this isn’t up to much.”
But I continued drinking as I ate my lunch, and with spicy food – in this case a freshly made chilli – Barney’s brew comes into its own.
It’s a Wheat Beer spiced with cardamom, coriander and black pepper, and these combine to give a sharp, refreshing herbal hit that cuts right across the chilli heat very nicely.
You only get the merest sniff of toffee ad bananas and a snatch of honey and bitter lemon hops before the pepper pops and the herbs and spices tingle on your tongue.
Drunk alone this beer could become a bit sickly, but with spicy food Barney’s Brew is a winner.