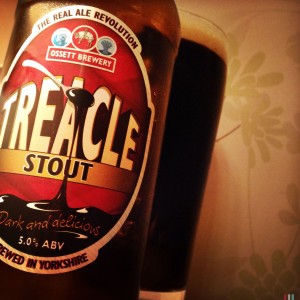 Hello.
You’re nice.
I like you.
Ossett’s Treacle Stout is, to put it in a nutshell, far better than I was expecting.
With the word treacle in the name I was expecting something sickly sweet.
But this is nothing like that.
Instead, Treacle Stout is a thick, warming, digestive biscuit and rum fuelled, coffee and chocolate heavy Stout that smells of honey and Marmite.
What makes this beer particularly good is that it’s packed with bitter, dry hops which cut right across the sticky treacle toffee goodness in the most delicious way.
Treacle Stout begins with a lip smacking sweetness and ends with a long and drawn out knife sharp green herbal bitterness.
Yes, I like you a lot.