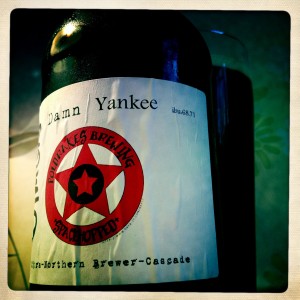 I have a friend who lives in Market Harborough where my day job is.
In fact I have four friends there.
Two of them work in Duncan Murray Wines (one of whom is Duncan Murray), one of them used to be, and is again, the singer in Yeah Yeah Noh (my favourite band from Leicester), and the other is a member of CAMRGB, just married, rather funny, a brand new home brewer and someone I feel I’ve known for ages but have never met in real life.
Jon (@hippy_jon), for it is he, has started making beer and this is his first brew.
The smell is resinous pine and orange marmalade and the beer is a good deep amber colour.
Damn Yankee has a nice rich toffee and shortcake malt, and its mix of Citra, Northern Brewer and Cascade hops make a for a tangerine, grapefruit and lime juice sharpness, leaving you with a clean, dry bitter finish.
My only complaint would be that this bottle was just a tad flat, but for a first brew this is brilliant.
Jon, I owe you a pint.
Cheers.