Posted on September 6, 2013 by Simon Williams

I have it on good authority that Elgoods have open square fermenters and that they have recently brought in a Belgian brewer to help them create some new beers using this fermenting technique.
The result so far are four beers packaged in a Craft style, two of which I have already reviewed.
I sense some bandwagon jumping, and who can blame them.
The problem is that like Greene King, the beers are terrible and any amount of clever packaging – at least Elgoods have refrained from sticking the C word on the new 330ml bottles – can’t hide the fact.
The first two beers I reviewed were based on Elgoods’ Black Dog Mild, these two are wheat beers supposedly brewed with the Belgian influence. 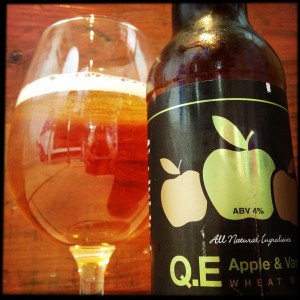 QE Apple & Vanilla Wheat Beer (4%)
An overly sweet, sugary apple flavour climbs out of the glass and knocks your face off.
There is absolutely no way of knowing if the wheat beer supposedly at the heart of this monstrosity is any good or not as all trace of it is destroyed by the cloying, sticky, apple flavoured attack that infests your whole being.
You don’t get any bitterness at all, and I’d expect at least a little tartness from fresh apple juice used in this way.
It’s just a constant onslaught of sweet sickliness and it went down the sink. 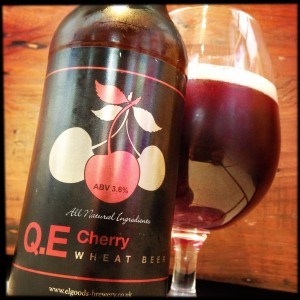 Cherry Wheat Beer (3.6%)
You can pretty much take the Apple & Vanilla review above and stick the word cherry in where appropriate.
I would be very surprised to find many beer lovers liking this new range from Elgoods.
They all taste of flavoured alco-pops.
The sugary cherry sweets in this drink obviously hate beer with a passion as they’ve gone all out to kill off any trace that this liquid has started life in a brewery.
It tastes like it began its sorry life in a laboratory.

One Response to Two Wheat Beers From Elgoods & Sons