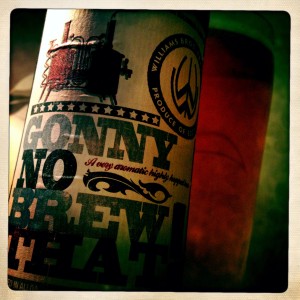 I seem to only ever by Williams Bros. beer when it’s in Sainsbury’s Great British Beer Hunt.
They’re there every year.
Gonny No Brew That invites you to say its name in a cod Scottish accent, and I believe it may be named after a comedy sketch about two men in a lighthouse.
This is a Pale Ale – or is it a Golden Ale? – with lots of fruity hops.
There’s a malty wafer biscuit base, some caramelised sugar and a pinch of sea salt.
But it’s the hops that rule the roost.
Plenty of peach, apple juice, gooseberries, bubble gum, jelly sweets and nettles make for a crisp clean finish.
Rather nice, even if it does turn me into a comedy version of my friends north of the border.