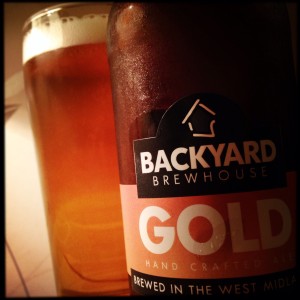 Oh dear.
Where Backyard’s Best bitter was so very good this, their Golden Ale, isn’t.
There’s an unpleasant washing up liquid soapy lemon aroma and an oiliness as you drink that’d rather unappetising.
The malts are honey and shortcake, burned sugar edges and a pinch of salt which on its own is quite nice.
For the problem is the addition of Citra.
It just doesn’t work in this beer alongside the Challenger, Cascade and Styrian that are already in here.
It’s what adds the light cat wee and soap to the smell and the taste.
I can just about make out the sharp bracken and hazel hoppiness but the soap scum lemon furniture polish of the Citra wipes everything else out.
What a shame, I’ll stick to their Bitter in future.