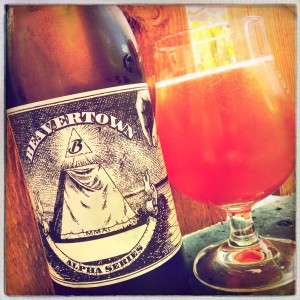 What a terrible, terrible beer.
Initially I thought I might just have a bad bottle, but having wandered around the internet for a while it would seem just about everyone thinks the same.
The main problems here are an almost complete lack of fizz – there’s simply no life in here – and a sourness that tastes singularly of vinegar and lemon juice.
I hoped for a lot more from a beer made specially as Beavertown’s 100th brew.
The aroma has a slight first-thing-in-the-morning-wee stench to it, and there is so little of anything to distinguish in here save for the slightest hint of raisins (amazingly there were a LOT of raisins used in here if Beavertown’s blog is to be believed).
Happy birthday Beavertown, this went down the sink.