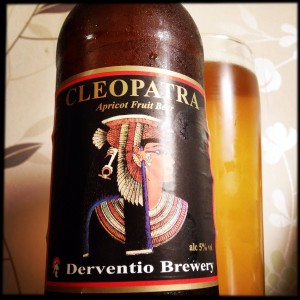 This apricot beer really does smell of apricots.
A lot.
You ca taste them too, their furry skins and their pale yellow bodies give a fruity, slightly tart edge to this decent Golden Ale.
The malting is honey and wholemeal bread rich and the First Gold hops are sharp and bitter.
But it’s the apricots that make this more than just another drinkable if uninspiring Golden Ale.
I wouldn’t want this often, but now and again and as a bit of a change, Cleopatra is a rather nice beer.