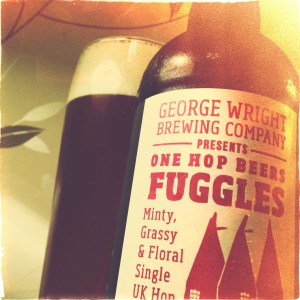 Up until now I’ve really enjoyed the George Wright single hop beers, but I’m not too keen on this.
Maybe it’s the Fuggles.
Or the lack of them.
To me this is just a big malty monster full of sticky sugar syrup and burned caramel, and that makes it difficult to see where the malts finish and the hops begin.
You get a decent enough bitter, dry finish, but you have to wade through  the thickest treacle quagmire to get there.
So, maybe it’s just the Fuggles, or maybe there aren’t enough hops, but all in all as a show case for a single hop variety this doesn’t show these hops in a very good light.