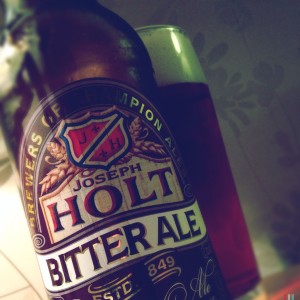 I wish I had more to say about this than I do.
This is a Bitter.
It’s malty, with a biscuit and honey smell and a biscuit and honey taste.
There’s a soft hoppy bitterness – vaguely green and grassy, Fuggles? – and a finish that’s sweet and bitter and reasonably dry.
This is a reasonable beer.
Like having a reasonable conversation with a reasonable man, there’s no shouting, just polite agreement.
Joseph Holt’s Bitter Ale isn’t a bad beer by any means it’s just so reasonable as to be unremarkable.