“I’ll make a bet that we all own something
That disagrees with our politics.”
– The Sisterhood Of Convoluted Thinkers 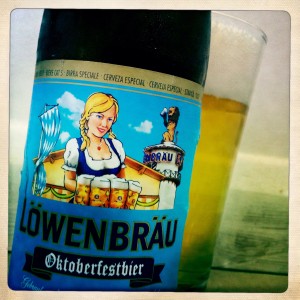 I try so hard to steer clear of anything owned by AB-InBev these days, but this came as part of a mixed case, so I didn’t have a great deal of choice.
And not being one to waste a beer unless I really have to, I chilled it and poured it and drank it.
And enjoyed it.
Yes, I enjoyed it.
Through gritted teeth I enjoyed it.
Löwenbräu’s Oktoberfestbier isn’t the greatest beer of it’s style, but nonetheless it’s a higher ABV lager that does everything you want and does it well.
It pours a light golden straw colour with a big fluffy cloud for a head, and its smell is flowers soaked in gin, apple crates and mixed spice.
There’s a warm alcohol kick that stops just shy of a burn as you drink and this heat emphasises the sweet honey, maize, buttered croissants and white pepper of the malts.
There’s a crisp herbal, almost fresh tarragon to the hops.
They’re juicy and not quite aniseed but almost and they lead to a creamy, bitter and very refreshing finish.
I won’t be buying Löwenbräu by choice, but if I get it by accident I won’t be saying, “No.”