Harold Wilson famously once said “A week is a long time in politics”.

Well, if a week is a long time in politics then two months is a bloody long time in beer, however this, to my shame, is how long it has taken me to prepare this review and actually get round to posting it. I’ve had several starts, all with the best of intentions however I’ve never quite got so far as typing the words out. It’s not down to the lacklustre nature of the beer or the launch itself, as you will discover should you choose to read on I had a rather enjoyable afternoon, but more probably the thought and process of putting my words down on somebody else’s blog and being entrusted to do so. It seems strange to me that I should baulk at such a rudimentary hurdle but I now feel that the time is right to relay my experience. So I’ve stolen Simon’s log-in and password (with permission you understand) and gate-crashed this party. Time to start at the beginning ….

I received an e-mail from Simon (or Mr CAMRGB as I’ve heard him called) back in July asking me if I would like to attend the launch of Shepherd Neame’s new Whitstable Bay range of beers in his place as he was unable to do so. It was an invitation I gratefully accepted, the chance to drink some ‘new’ beer the day before the Trade Session of the Great British Beer Festival really was something I couldn’t turn down, so I duly found myself at the Hoop and Grapes, a Shepherd Neame pub in London’s Farringdon Street a little before the actual start of the event. I’m prone to being early for these things but this does mean I get to take in the surroundings and generally have a drink and a chat with some of the attendees or organisers or often both, and today was to be no exception. I grabbed a pint of the Pale Ale from the main bar before making my way 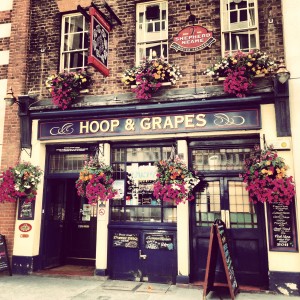 upstairs to where it was all to take place and was warmly greeted by John Humphreys, Shepherd Neame’s Communications Manager. I have to admit that I monopolised a considerable amount of his time, talking about the beer I was drinking, the beer range in general, clear glass bottles, experimental brews, the brewery itself and his role in the business. Others had started arriving by this point, notably Iain Loe, CAMRA’s Research Manager and National Spokesman now retired, Susanna Forbes from Drink Britain and Rowan Crowley, the Director of eInsideTrack Ltd and Hospitality and Catering News Services, all of which I had interesting and informative discussions on a range of subjects (but mainly beer) during the course of the afternoon.

I helped myself to a pint of the Whitstable Bay Lager before we were gathered together to watch John deliver the presentation. This was a series of slides which outlined Shepherd Neame’s vision and concentrating on the point they were at right now as much as the beers themselves 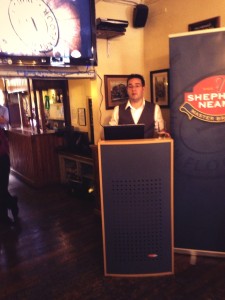 . I won’t go into this in depth, however I did glean some information that I shall pass on that may well be of interest. Firstly, as you will be aware, Shepherd Neame is Britain’s oldest brewer with the records dating back to 1698, it says so on the top of the bottles so it must be so, only it isn’t. New records have come to light showing brewing on the sight from as early as 1507, taking the history back nearly two centuries which I found quite astonishing. In its portfolio there are 23 ales and 6 lagers, plus an expanded seasonal range and pilot brewery beers. It owns 350 pubs and hotels, is the closest UK brewery to its hop gardens, and is the last brewery to use solid oak mash tuns. However, the fact that caught my attention was that Armstrong and Miller actually approached Shepherd Neame about using their Air Force characters to promote Spitfire rather that the other way around. A lot of what you see in the advert is their ideas and they also host 1940s nights in Shepherd Neame pubs. So now you know.

After this was over I had another lager and made my way over to talk to Head Brewer, Richard Frost. Richard is quite a quiet man, however he has a wealth of experience in brewing having previously worked for Marston PLC, or more specifically Banks’s brewery for nearly 30 years before taking up his current position early in 2012. The brewing process is something that has interested me ever since I can remember and can still recall the smell in the centre of Romford when the Romford Brewery Company were brewing at the Star Brewery there, and listening to Richard’s stories of brewing on a similar scale were a joy to me. I asked him about the beer and its perceived blandness within some circles of the drinking fraternity however he answered honestly that the local population drink the beer in great quantity and like it just the way it is, and I couldn’t really argue with that. I also mentioned the clear bottles, a particular pet hate of mine however this was countered with the response that market research shows that the ‘general public’ (a description that always leaves a sour taste in my mouth) prefer to buy a drink that they can actually see the colour of. This answer has never really satisfied me especially as champagne, toothpaste and even petrol seem to sell perfectly well without displaying their true colour until point of dispense, however I felt that it possibly wasn’t the right time to pursue that point.

Soon enough it was time for me to leave, so after drinking a bottle of the superb Double Stout (not part of 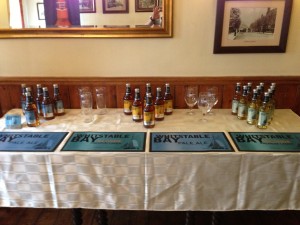 the range) and obtaining a bottle of the lager for my wife Sarah which she very much enjoyed I said my goodbyes and made my way home. Reflecting on the launch itself, it was possibly the most formal I have attended however it was none the worse for that. The conversation was good and informative as was the beer and I hope I get invited again as I had a rather good time. The star was, of course, the beer so here are a brief description of the three to whet your appetite perhaps.

Whitstable Bay Organic Ale 4.5%. I have unashamedly taken my notes from the press release here as I didn’t sample this on the day. This is simply their existing Organic Ale re-badged under the Whitstable Bay name using, as before, organic Challenger hops, organic Crystal malts and even the water is a certified organic ingredient, coming from the breweries own chalk-filtered artesian well. I was unaware that there was such a thing as ‘organic water’ prior to discussing this with Richard however he was able to tell me just how stringent the checks are before something is ‘Certified Organic’ as this beer is.

Whitstable Bay Pale Ale 4.0%. Described as a ‘full-bodied, fruity ale’ and brewed with 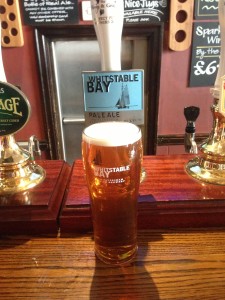 Tettnang and Styrian Goldings hops this beer pours a radiant golden colour with a thin cluster of pure white bubbles nestled together for a head. The aroma is quite dry with some floral notes and grapefruit too, but this is not a freshly cut grapefruit oozing juice but rather a whole grapefruit cupped in the hands and raised to the nose before inhaling deeply. Lively with carbonation over the tongue it releases a light floral citrus flavour that is both dry and satisfyingly refreshing. The finish is also dry with some grapefruit peel, grassiness and a hint of white pepper rounding of a rather tasty and very English Pale Ale. Much to my surprise however, this wasn’t my favourite beer of the three as that honour belonged to the lager.

Whitstable Bay Blonde Lager 4.5%. It pours a pale golden colour with a vibrant white head much as you would expect from a beer of this type however the aroma immediately marks this beer out as something a bit special. It’s full and vibrant with flashes of grapefruit, orange peel, aniseed, white pepper and some malted milk biscuityness buried right at the back. Not as lively as the Pale Ale surprisingly it is nonetheless a little prickly over the tongue bringing with it some wonderful citrus flavours and a little crushed coriander seed orange spiciness with some nice Rich Tea biscuit underpinning it all. The finish is dry with grapefruit peel much like the Pale Ale however this is far for spicy and peppery a real delight in the mouth and, dare I say it, possibly one of the best lagers currently produced in the UK right now. To say that I enjoyed this beer is rather an understatement and if you see this lager, brewed with Challenger, Centennial and Saaz hops, then I urge you to try it and see for yourself.

I’d like to thank Simon for giving me the opportunity to attend this launch, and also to apologise for taken so blooming long to actually getting around to writing it up!