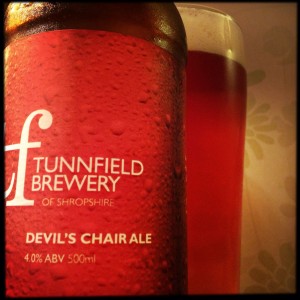 Now this is a nice beer.
Not the beer it says it is, but nice nonetheless.
Tunnfield is based in Shropshire and this beer is named after a local landmark that I know very well.
Devil’s Chair Ale claims to be a rich ruby colour but it’s not, it’s a nice warm amber.
It also claims to have a big hop aroma but it doesn’t, it’s a nice biscuit and honey smell.
But none of that matters because Devil’s Chair Ale is a really good, drinkable, Bitter.
You get a big sticky toffee, walnut and digestive biscuit malt and a sharp, bitter, lemon, hedgerow and bruised apple hop that leaves a finish that’s long, crisp, bitter and dry.
I’ve not heard of this brewery before and I’m looking forward to trying more.