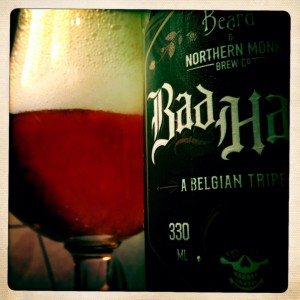 As you can see from the photo, this beer is rather frothy.
I first had this at Birmingham Cubed and it was my beer of the day.
Trying it again, and this time bottled rather than form a keg, I can only agree with my first impressions.
Bad Habit is terrific.
It’s a big, fat, cheeky Belgian Triple packed with warm yeasty bread dough goodness that gives way to honey soaked french toast, a pinch of cinnamon and some crushed red peppercorns.
And then for good measure, there’s an enormous apple core rinsed in brandy.
It’s the biggest apple core you’ve ever seen.
About the size of a football and burning with lovely boozy booze.
Towards the end you get a light green herbal hop and then a finish that’s warm and sticky and bitter and spicy.
This is one hell of a Belgian Beer for a beer that’s not made in Belgium.