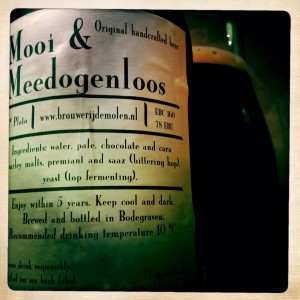 Those who know me know how much I love De Molen, know how key they were to me becoming a Beer Geek.
I don’t really need to write about this beer, it’s almost enough to say who made it.
I certainly don’t need to break it down.
But I feel I have to try.
Mooi & Meedogenloos (Beautiful & Ruthless) is a Belgian style Strong Ale, a Triple, a Beautiful Monster if you remember The Folk Devils.
The aroma is heavenly Monk brewed beauty and the colour is their dark woven cassocks.
What once upon a time was a mind blowingly pin sharp focus of flavour that I found in De Molen is, now I know a little bit more about how beer works, a joy in brilliantly balanced , dangerously drinkable excellence.
All you really need to understand Mooi & Meedogenloos is that it captures all the things that make you pour your favourite Trappist beer and it does it in spades.
I’ll stop gushing and fawning now, but De Molen still blow my mind.