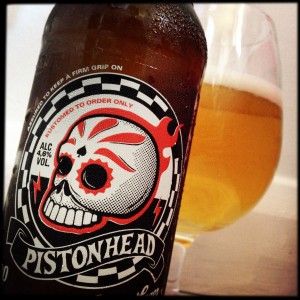 I found this in Tesco.
It jumped right off the shelf at me with its super cool label, and on opening it I wondered as I poured if the beer could possibly live up to its cool packaging.
It just about does.
Pistonhead Kustom Lager is crisp and dry, pours a bright gold and smells of musty spiced apple skins.
The malting is caramel wafers, mixed peppercorns and buttery brioche, and the hops are green and fresh, with hints of garden flowers and just a little herbal slap that leads into a clean, refreshing finish.
All in all a beautifully presented and well made little lager.
After drinking it I wondered who Brutal Brewing are as the bottle states that the beer was brewed for, and not by, them in the EU.
According to their website, “Brutal brewing was established in 2011. It is an initiative of employees of one of Sweden’s leading breweries – Spendrups. Brutal Brewing is controlled and operated by
employees of Spendrups on a “free time” basis.”
If this is true, then I like the idea very much and judging by the range they have on offer I’m looking forward to trying some more of their beer.
Especially the 30% Stout.