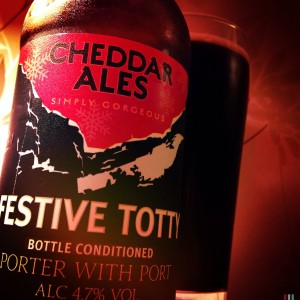 It’s that time of year.
The nights are dark and the air is cold and I’ve broken out the winter beers.
Festive Totty is a “Porter With Port” and I like it very much.
I like its chocolate and red wine aroma and I like how the coffee, nuts and chocolate of its malts are enhanced by the warm woody tannin tinged roundness of the Port.
I like its hops too, they’re crisp and crunchy, spiky like holly leaves and good and bitter.
The only thing that I don’t like is the name of the beer – And before you say anything I know that it’s because Cheddar’s Porter from which this beer derives is named Totty Pot after a local mesolithic landmark – But here, especially given the tag line of, “Pull A Christmas Cracker,” it has been needlessly turned into the supposedly harmless sexual innuendo that feeds that awful pretty girls and pump clips mindset of a certain beer persuasion.
Other than that, this is a very nice winter beer.