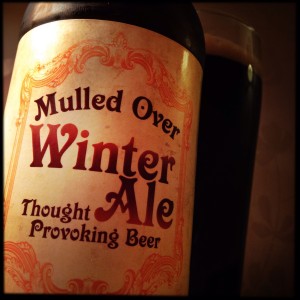 Brewed in collaboration with Best Of British Beer, Mulled Over may not quite be the “liquid fruitcake” that it claims, but it’s pretty good nonetheless.
The smell is spicy nutmeg and cinnamon and the flavour follows suit.
Mulled Over’s malts are bran rich rye bread covered in festive spices, mace and cinnamon, and some very nice sticky toffee.
There’s a decent bite from the hops too, all crunchy leaf litter and spiky nettles, along with a good bitter lemon juice sharpness.
The only thing that stops this being liquid fruitcake is the lack of weight.
In my opinion, to be really cakey you need the hefty heat you get from a much higher ABV, like the feeling you get when you take a mouthful of Fuller’s Vintage Ale.
But that’s just my pedantry as Mulled Over is a very nice festive beer.