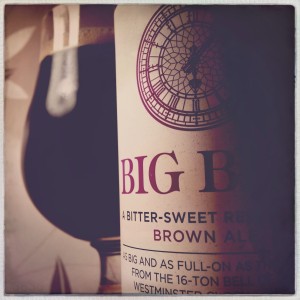 I really really REALLY try to like the Crafty Dan beers.
A couple of them have been very good indeed but this, like 13 Guns, just isn’t as great as it promises.
Big Ben is a Brown Ale that pours a beautifully dark mahogany, but its smell is somewhere between lemon groves and pub urinals, all bitter lemon, disinfectant and Armitage Shanks.
Thankfully the flavour is a lot better, with a big round fruity body, some honey and cinnamon, chopped nuts and a nice crunchy Cheerios cereal underpinning a crisp and brittle winter leaf litter hop that’s earthy and resinous.
Big Ben is a beer that starts badly but finishes well.
If Thwaites could just clean up the smell this would be very good indeed.