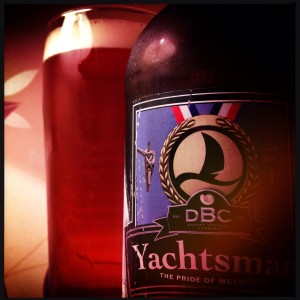 I do like DBC’s beer, and this is why.
Yachtsman is a crisp, clean Pale Ale with lip smacking New Zealand hops.
But that’s for later.
First I have to tell you about how the beer pours a light amber with an aroma that’s lightly spiced apple cake.
There’s a very nice runny honey and wholemeal cracker malt that’s doused in orchard fruits.
And then across all this lovely round fruitiness cuts a sharp gooseberry and kiwi hop with lots of grapefruit and lemon rind  that’s all wrapped up in fresh green herbal leaves.
Yes, I like DBC’s beer very much, and Yachtsman is a perfect example why.