This article has been waiting two months as a draft because I have wanted to interview First Chop about their brewery and their beer.
For one reason or another this hasn’t materialised and so I’ve decided just to tell you what I know.
That’s not much actually, other than I was first lured to try them because I really liked their branding, and so when I saw you could buy them through EeBria I thought I’d kill two birds with one stone and try the beer and test out this new online store.

First Chop Brewing Arm are based in Salford but don’t give much else away on their website.
Maybe they just want the beer to speak for itself.
If that’s the case, then the beer speaks volumes as you’ll see. 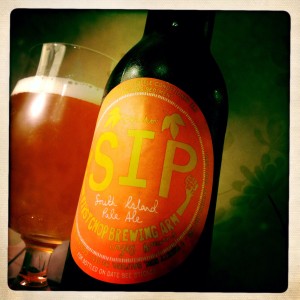 SIP (5.4%)
Sip?
This is more glug.
A South Island Pale Ale, SIP s absolutely super.
It pours a light orange with a soft foamy head and smells of fresh fruit salad in white rum.
It’s all peaches and satsumas, grapes and kiwi.
Taking a swig you get big hops, all fresh sharp limes and mandarins, some gooseberry, orange marmalade and green bitter leaves.
There’s a super malting here too.
It’s a tasty brick of slightly salted nougat, biscuits, toffee, and some burned sugar that adds a warm bitterness, while a light peppery heat lurks in the background.
The finish is bright and clean and fizzy with sherbet flying saucers and a knife sharp bitterness.
This should come in bigger bottles. 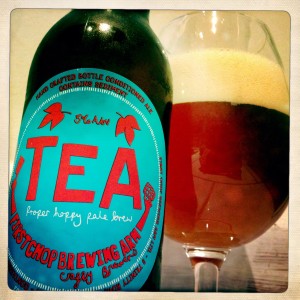 TEA (5%)
Another winner form these chaps.
TEA is a “proper hoppy pale brew” and it smells sweetshop fresh and spicy, not unlike I’d imagine peppered Starburst to be.
The beer is a very nice amber with a big fluffy head, and taking a sip is succumbing to the friendly fire f soft buttered croissants, caramel and HOPS.
Big and smiling, sharp as a tack, resinous, sinewy, brilliant hops.
There’s a deep nettle tea and bramble jelly, tangerine zest, lemon pips and grapefruit pith.
And then there’s a finish so dry and brittle your tongue will fall off.
Super duper. 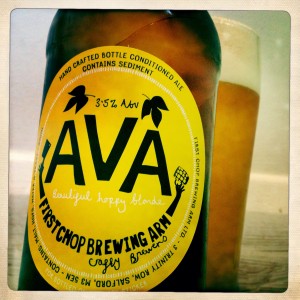 AVA (3.5%)
Easy drinking hoppy goodness, that’s what AVA is.
Pouring a warm golden straw with a billowing white cloud for a head, this Blonde beer smells of sharp lemon zest and garden flowers.
There’s a super soft, delicate malt whose presence is subtle but just there enough to provide some biscuit and caramel body, giving the beer substance in your mouth.
And it needs to be there too as the hops are pin sharp and could otherwise turn AVA into a thin and bitter baddy.
Instead, over this malty bed, there’s gooseberries and lemons, peaches and pears that leave you with a very dry and brilliantly bitter finish. 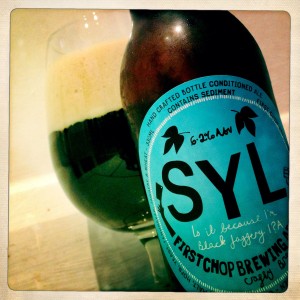 SYL (6.2%)
Described as a “Black Jaggery I?A,” this is an absolutely brilliant little bottle of beer brewed with fenugreek and Jaggery, which I have just discovered is a traditional Asian form of sugar.
What it does in here is create a lovely stickiness, not overly sugary and certainly not sickly, but definitely thick and gloopy and slightly salty sweet.
SYL’s aroma is aniseed, patchouli and flower petals, and when you take a mouthful there’s a good crumbly biscuit, some coffee and Brazil nuts that add a very good woody earthiness.
The hops in here are zingy, sherbet coated lime leaves, mandarins, apple juice and fresh green herbs.
SYL’s finish is treacle tart rich, bitter as gall and as long as you can manage.
This is a very good beer indeed. 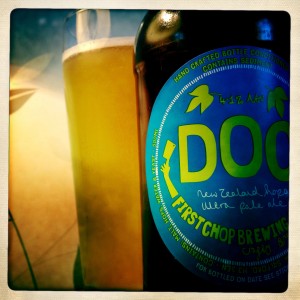 DOC (4.1)*
This “Ultra Pale Ale” is my first from this brewery and it’s really rather nice.
I like the branding a lot, it’s fun, not too serious, good to look at.
And I like the name of the brewery, it conjures up old indie bands and nights listening to John Peel tell us that the next record is by some unknown blokes with a funny name, a la Half Man Half Biscuit.
But most importantly the beer tastes good.
DOC pours a light straw colour with a soft honey, mandarin and kiwi smell.
The malting is super light, a delicate buttery brioche with a runny caramel coating, but it’s the hops that win the day. There’s lots of New Zealand hops in here and they do just what you’d want them to.
With lots of kiwi and orange rind, lemon zest, lime leaves and fizzy sherbet gooseberries, the bitter and crisp flavour builds as you move down the glass, leaving you with a very nice dry finish.
Very good indeed.

*This is an earlier review added for completeness.