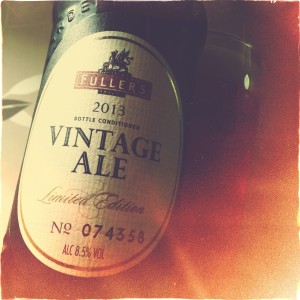 Over the last few years a highlight of December for me has been Fuller’s Vintage Ale.
This year is no exception, and this year’s beer is as good as it’s ever been.
It’s warm with whisky heat, earthy, rich, round and just a little tart.
The winter barley used here is honey coated toasted cereal bars, sultanas and flaky pastry, and the mix of Goldings, Sovereign, Challenger and Admiral hops give you bracken greenery, dandelion leaves, pear juice and lemon rind sharpness.
I know I’m supposed to be laying these beers down to age and blah blah blah, but I simply don’t have the patience.
I nearly bought two bottles when I saw them in Waitrose, but I’d simply have drunk them both.
That said, I might pop back tomorrow and buy another couple.
Cheers.