Posted on November 2, 2013 by Simon Williams 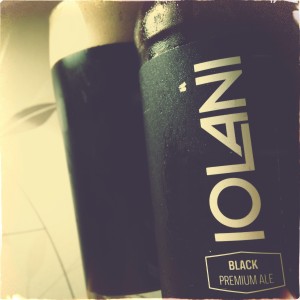 Iolani’s Black smells of cooking chocolate.
Do you know what I mean?
It smelled sweet and appetising when you found it in your cupboard and you really want to have a nibble, but you know it won’t taste quite right until it’s been melted and cooked with.
Fortunately for his beer, everything has definitely been melted and cooked properly.
The flavour is a thick and bitter dark chocolate, tree bark, black coffee and rather oddly, though not unpleasantly, baked sweet potato.
There’s a good mouth coating creaminess that feels good, and there’s a leafy crunchy hop that adds a brittle and satisfying pithiness to the finish.
Very black and very nice.