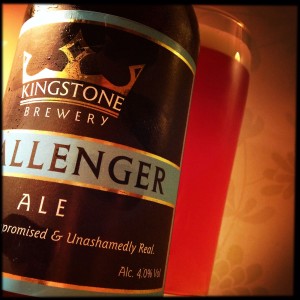 For a beer brewed to highlight a hop variety, this is a very malty beer.
That’s not an altogether bad thing, just a very malty thing.
Challenger pours a deep amber and its smell is biscuits, red berries and Brussels sprouts.
So, you take a sip and immediately the flavour is a big, dry, bran rich digestive coated in caramel.
It’s crunchy, rugged, and very very big.
Around it there’s a little fresh cabbage, some tobacco, tea leaves, chard and dandelion that make for a finish that’s crisp and dry and bitter.
Not a bad little beer per se, just not the Challenger bomb you might have expected.