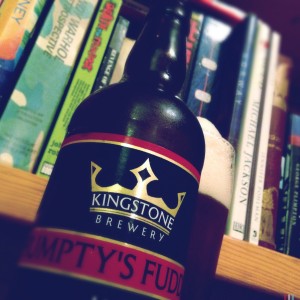 Humpty’s Fuddle is Kingstone’s IPA, which I’m pleased to say is a decently high ABV.
The beer pours the colour of Golden Shred marmalade and there’s a nice orange rind and yeasty apple core smell.
Humpty’s malting is nicely fruity, all apricots and pears on a shortcake biscuit with a sprinkling of white pepper.
The hops are grassy, green and pithy, with some aniseed, dandelion and burdock, and just a hint of boiling Sunday greens.
This all makes for a beer that fizzes nicely on your tongue while feeling thick and rich, leaving a crisp and nicely bitter tamarind dryness that lingers in a very inviting way.