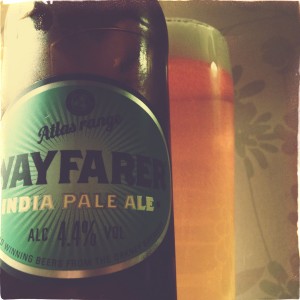 Oh dear.
Wayfarer is an IPA with an unpleasantly thin, astringent lemon juice smell and flavour.
It actually smells a lot like the washing up liquid in my kitchen, slightly fake and a little bit soapy.
And the lack  of any body form the malts make for a singularly one dimensional Jif squeezy lemon of a beer.
The main problem I have with a beer like this is that the lack of body means that the acidic citrus starts to taste a little like bile that leaves a sticky almost-sour aftertaste.
As Ren & Stimpy might once have said, “No Sir, I don’t like it.”