Posted on November 4, 2013 by Simon Williams 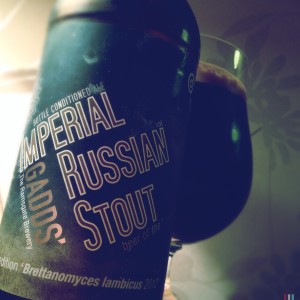 “Well well well,” as Rolo McGinty once said, though I’m not sure he was talking about Imperial Stouts inoculated with Brett yeasts.
This is one hell of a beer.
It pours black hole dark and smells of chocolate and red wine.
What really impresses me in this little bottle of goodness is that it isn’t a one trick pony.
It’s not simply a sour Stout.
No, no.
Instead it’s a Stout full of chocolate and coffee, burned toast and digestive biscuits, a Stout full of plums and prunes, rum and raisin.
It’s a Stout with a good crunchy autumnal, dry leaf hopping that just happens to have an eye wateringly lovely sourness at its edges.
The yeast adds a red wine tannin feel and a big hit of dry, astringent sourness, but it’s done so well that it doesn’t overwhelm in any way.
In a single mouthful Gadds’ Imperial Russian Stout with Brett yeast is in the running for my beer of 2013.