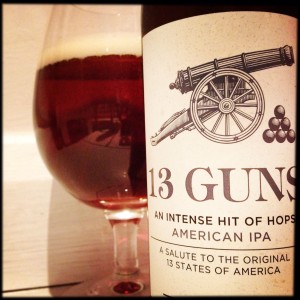 Brewed at Thwaites’ micro brewery, 13 Guns is an IPA with American hops.
It pours a deep chestnut brown and smells of toffee, peach and mango.
There’s a big bold malt, all round and chewy, thick with toffee and Garibaldi biscuits.
According to the label, Thwaites have used a lot of hops in here, but for me there’s nowhere near the “intense hit of hops” that the label claims.
You get some nice redwood resin, pine needles, grapefruit and tangerine skins, but it’s all a rather mellow affair.
That’s not a bad thing of course, just not what I was expecting.
Instead of the hard and sharply bitter tongue drying finish you might expect from an American style IPA, 13 Guns is creamy and zingy and rather satisfying in a well rounded and comfortable way.
A very nice beer indeed, but for me it’s not quite as described.