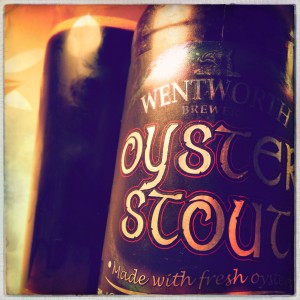 “Made with fresh oysters,” declares the bottle.
That’s all well and good, and there’s a certain seaside saltiness when you burp, but this is nowhere near the “full bodied and sensually smooth” beer Wentworth tells you it is.
In fact Oyster Stout feels thin and bodiless.
The aroma is very weak, and there’s an almost sour tinge to the flavour.
There’s chocolate, toast, rum and raisin to the malts but they’re a bit feeble, a bit insipid, and the hopping pretty much follows suit.
All this makes for a pretty watery beer, a thin beer, a beer that may well have oysters in it but it doesn’t feel stout in any way.