Brewing and bottling beer doesn’t always go to plan and buying bottle conditioned beer can, on occasion, be a hit and miss affair.
Should it be though?
Should we as consumers expect every bottle to be perfect?
I’m not altogether convinced that we should.
Yes it’s extremely annoying and frustrating when you open a bottle you’ve paid a few quid for and it’s either flat, explosive or just plain off, but there’s a part of me that kind of likes that to happen now and again as it reaffirms that the producer is a human running a small business and trying to make the best possible product they can.
Or does it?
Maybe it’s just lackadaisical, half hearted workmanship.
I suppose it depends where the bad bottle comes from.
If it’s from a brewery you know and love you tend to accept that these things happen now and then, but if it’s from a brewery that’s new to you you tend to judge it far differently and are prone to label it, “a bad brewery.”
Is that a fair judgement?
I don’t think it is, but I know I’m guilty of doing the same thing.
A case in point.
Last night I had two bottles of beer by Siren Craft Brew, a brewery who I’ve drunk in the past and who I think are rather good at making beer.
The first one I opened was as flat as a pancake but instead of dismissing it out of hand I wrote the review you’ll see below.
I then opened my second bottle which poured beautifully and had nothing wrong with it.
I read them back this morning and had to wonder if I’d have reviewed that first bottle the same if it hadn’t been from a brewery I knew.
I’m not convinced that I would, and so I’m going to take a long hard look at myself and try and consider what I’ve said above when faced with my next gusher/dishwater bottle.
Here are the reviews I wrote last night. 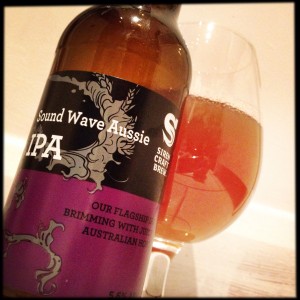 Sound Wave Aussie IPA (5.6%)
This little bottle of beer tastes superb.
It has a lovely soft chewy toffee malt caked in biscuits, and a mix of Australian hops, namely Ella, Summer, Galaxy and Vic Secret, that gives you a super citrus bitterness and underripe blackberry tartness that’s tongue twisting fun.
The smell is fresh and fruity.
All very good, all very nice, but unfortunately this bottle is completely flat and as such all this loveliness ends up feeling a bit damp.
What a shame.
I imagine it’s just that I grabbed a bad bottle. 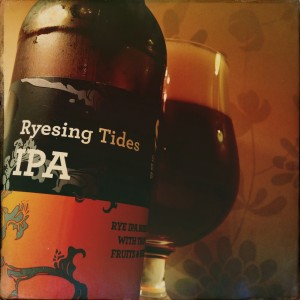 Ryesing Tides IPA (7.4%)
When Siren gets things right, it gets things really right.
This is a case in point.
Ryseing Tides is an IPA with rye that pours a delicious deep amber with a fluffy cloud for a head and a smell that’s mango, berries and Juicy Fruit chewing gum.
Unlike many rye based beers, the malting here isn’t overly earthy.
You do get that pumpernickel body and rich bran that’s slightly meaty with lots of sweet honey, but it’s not overpowering.
And the hops are a delight.
Fizzy jelly sweets, peach juice, grapefruit skins and a hint of morello cherry.
The finish is super fresh and lip smackingly bitter.
Ryesing Tides is very good indeed.

5 Responses to A Tale Of Two Bottles: Siren Craft Brew