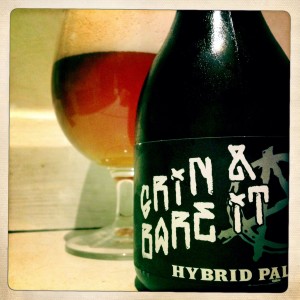 A Hybrid Pale.
A hybrid of what though?
Maybe I should Google it.
Ah, OK, I’m told this is a Pale Ale that has something to do with wheat beer, though I can’t find exactly what.
And if that’s the case then I for one can’t taste any trace of wheat beer characteristics.
It’s nice though.
Grin & Bare it pours a golden straw and smells of honey and hay bales.
The hopping here is good and strong, with lots of green grape skins, gooseberries, green tea and citrus juiciness, and the malts are soft and squishy toffees and shortcake biscuits.
And with its long dry and bitter finish, this is a rather nice beer that I’d presume was a straightforward Pale Ale if I’d not been told differently.