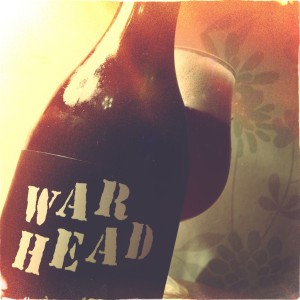 Seven in the evening could well prove to be a bit early to open a 100 minute IPA, but it just felt right*.
War Head is a massive mouth filling monster sized Jelly Baby bastard of a beer.
It’s a kid’s sweet with a knife.
It’s the school bully made of hops.
It’s a terrifying ride through a beery heaven/hell.
A tiny bottle with Tardis-like contents.
The malts are biscuity quicksand, dangerous but strangely exciting, and the hops are wateringly, head witheringly, painfully fabulous.
Now if you’ll excuse me it’s only seven and I’m being possessed by beautiful demons.

*This was written at seven o’clock yesterday. In the cold hard light of early morning with a head full of drums and whistles and barbed wire, seven in the evening seems to have been ridiculously early.