Posted on December 7, 2013 by Simon Williams 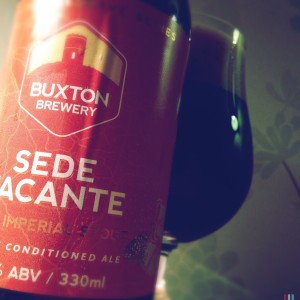 Sede Vacante is an Imperial Stout that was laid down to mature while Buxton were in between Head Brewers, but to be honest I’m not overly fussed about the back story as this is simply a superb beer.
It’s warm and boozy, rich with earthy whisky, coffee and bitter chocolate.
Its smell is damp and woody in the most delightful way, like finding treasure in a long boarded up cellar.
There’s a load of damp wood in the flavour too, along with superbly crunchy leafy hops, pine cones, undergrowth and a handful of All Spice.
The finish is a tannin tinged fruity delight that lingers like a good red wine.
Sede Vacante is really very good indeed.