Posted on December 9, 2013 by Simon Williams 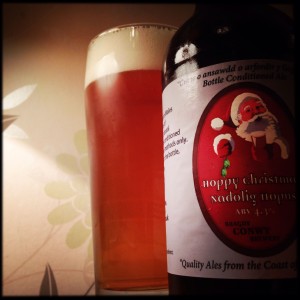 Sweetcorn.
Sweetcorn’s never been a particularly festive treat in our house, but that’s the overriding flavour here.
Sweetcorn.
I think this is now five out of five for terrible beers from this brewery.
Hoppy Christmas manages to have no aroma whatsoever., which I suppose is quite a feat.
And then you take a swig and it’s a sweetcorn feast.
There’s a bitterness to the finish that none of the Conwy beers have managed to achieve before, but it’s little consolation when everything else is so damned nondescript.
So, sweetcorn and bitter lemon, that’s Hoppy Christmas.
With this Conwy have secured their place on my list of least favourite breweries.