Posted on December 2, 2013 by Simon Williams 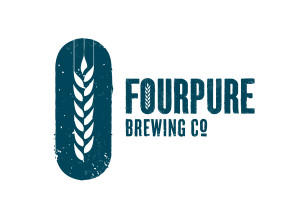 Recently another new London brewery caught my eye.
The name is Fourpure and they have created a range of beer inspired by their travels.
Always one for meeting new beer people and, most importantly, trying new beer, I decided to get hold of their range and to see if I could have a chat with the brewery.
I got hold of the beer vie EeBria and got in touch with Dan for a brief interview.
This is what I found.

Hello, who are you?
I’m Dan, part of the Fourpure Brewing Co. team, and joint owner with my brother Tom. We’re six people, obsessed with beer, good food and having a great time doing our job. John is our head brewer, Josie looks after our customers, Lucy looks after our accounts, Jemma looks after our systems, myself and Tom run the business, brew, drake the forklifts etc! We all brew, we all clean, we all deliver and we all talk to our customers. 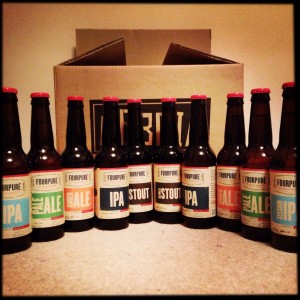 How, why and when did Four Pure start and what were you doing before brewing?
Tom and I used to run a technology business together, and I have always been an avid home brewer. In 2012 Tom spent a year travelling around the world with his wife Lucy which ended on the beer trail of California and Oregon, and I had the opportunity to step down from my day to day role for something less 9 to 5 – so we knocked heads together and started to form Fourpure at the end of 2012.

What made you opt for the initial range of beer that you did?
Before we chose our range, we got our initial team in place – these core beers needed to be part of our culture. Then we all sat down and talked about what beers we liked, and why, then did many many sessions to test and taste (hard, I know!) to realy work out what we wanted. We chose the beers we wanted to drink. 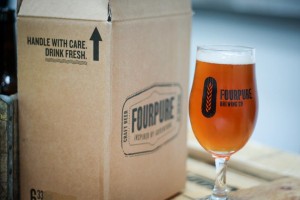 I’m a graphic design geek and graphic designer. As such I love your branding. Could you explain where the idea came from?
We’re not extreme purists, but we do think the ingredients have a lot to say for themselves – Malt, Hops, Water and Yeast. We don’t fine our beers, so there’s nothing added like that – but that’s not to say we don’t put oats in our oatmeal stout! It’s a concept about staying pure to the ingredients, brewing technically well, having fermentation and maturation processes in the brewery, to create bright flavoursome beer. Fourpure. 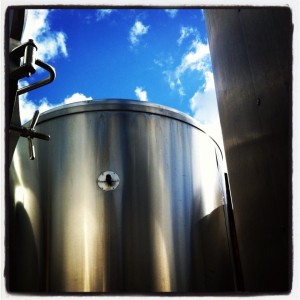 What kit are you brewing on?
It’s 20 brl/30 hecs pre loved by Purity. We bought that kit when they expanded, but replaced the fermentation tanks and added maturation tanks. We have capacity to brew both 30 and 60 hectolitre batches. We also have a 50l pilot brewhouse, a BrewMagic system from Sabco – this was my old homebrew setup. We play with this all the time.

Where are you going next? What are your plans?
We’re new and we have a lot to learn. We also appreciate we have entered the world of professional London brewers at the top end of scale, and we don’t want to damage existing brewers or their margins so are working hard on relationships – there’s plenty of space for us all in a growing craft market. We will work off the feedback to tweak the core beers for our customers, and through our pilot system and the tap room get feedback on ideas for seasonals and specials. Tap room opens for the first time this Saturday!

So, what about the beer? 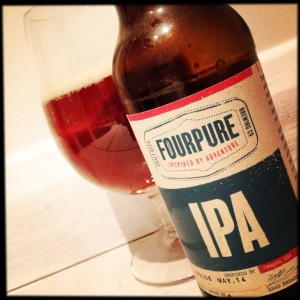 IPA (6.5%)
This is a really decent IPA inspired by the beer of Oregon and brewed with Cascade, Chinook and Centennial hops, that oiurs a very appetising dark amber.
Its smell is resinous, piney, honey rich and floral.
The malting is deep and round, full of rum and toffee, some apple juice and a good crunchy biscuit base.
Over this the hops are brittle, crisp, grapefruit sharp and sticky with redwood resin and pine needles.
There’s also some rather nice tangerine zest, a good sherbet fizz and jelly sweet fruitiness, while the finish is bitter, dry and deliciously long and lingering. 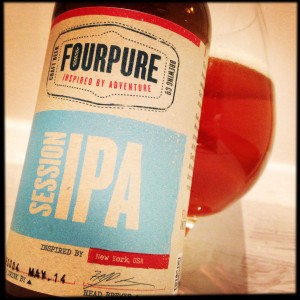 Session IPA (4.2%)
This one is inspired by New York and it’s a very easy drinking floral Pale Ale that’s not a million miles away from Goose Island’s IPA.
Sitting a warm amber in my glass, the aroma is light and airy, all meadow flowers and honey.
There’s a very good caramel malt that’s round and mouth-filling and packed with biscuits and a rather nice tamarind edge.
The hops are very floral indeed, they really have that Goose Island thing going on.
Not as heavy maybe, but definitely a similar meadow flowers, wood resin and red pepper sweet pithiness shot through with curry leaves and a sharp lemon bitterness.
The finish is crisp and clean and dry, all in all a very nice little beer. 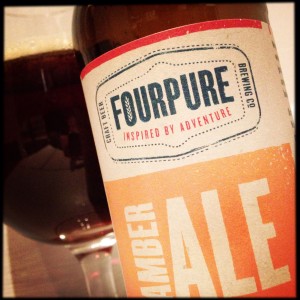 Amber Ale (5.1%)
Well now, this is a malty little beauty.
Fourpure’s Amber Ale is inspired by the beer of Colorado and is rich and round and plump with raisins and danish pastry.
Or is it doughnuts?
I can’t decide.
Whatever it is, it’s a big chewy ball of goodness.
There’s lots of toffee too, all melted and gooey and sprinkled with peppercorns.
Over this the Cascade and Pallisade hops provide a sticky pine resin, apricots and tangerine zest that cuts through the mouth coating fig and honey finish. 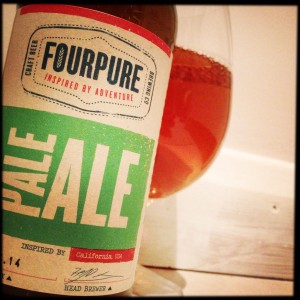 Pale Ale (5%)
This is the only beer I’ve found any real fault with, and it’s that this Pale Ale – Inspired by California – is a little bit flat.
It definitely needs more carbonation.
Other than that it’s a very nice drink.
The smell is satsumas and peaches in a wicker basket and the beer is a warm amber colour.
There’s a good digestive biscuit and runny honey malt, with little sparks of crushed mixed peppercorns popping and crackling in the background.
The Cascade hops are sharpened grapefruit segments that poke at your tongue, and there’s lots of sherbet sweets, redwood resin and a lick of pomegranate.
The finish is lightly oily, bitter and long.
I just wish it was fizzier. 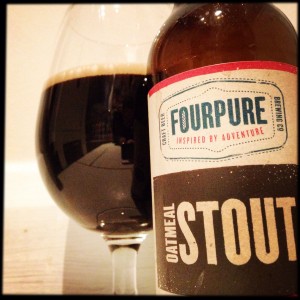 Oatmeal Stout (5.1%)
This dark purple brown Stout with its espresso crema head, inspired by London, is a real pleasure.
The aroma is warm porridge, coffee and chocolate, like a filling breakfast on a cold winter’s day.
This is a creamy beer with lots of burned wholemeal toast, some tobacco and wood smoke, berries, coffee and bitter chocolate.
There’s a woody, almost barky, resinous feel too, and the hops give you a crunchy autumnal redness.
They’re all leaf litter and orange peel and they add a fizzy bitterness to the rich and satisfying finish.

Thanks to Dan for taking the time to talk to me and for allowing use of the brewery photographs.
Source: EeBria