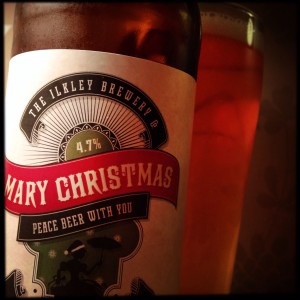 Earlier this evening I tweeted about being sat on a bus that stank of dope and how it smelled terrible, and I got a reply from Martyn (@Martyndamonkey) telling me he thought Amarillo hops smell the same.
And now I open this bottle of beer and get an enormous blast of cannabis and I love it.
But this is the smell of the homegrown cannabis I remember my girlfriend’s father growing twenty years ago, all fresh and herbal, and not the sickly overpowering skunky smell of modern hydroponically manipulated grass I smelled on the bus.
Within a sip Mary Christmas has become my favourite Christmas beer of 2013.
For a start it hasn’t got the cinnamon and nutmeg overkill of many other beers, instead the blend of herbs and spices is subtle and really rather clever.
Everything tastes fresh and green and alive.
Maybe it’s the addition of rum that rounds everything out, making Mary Christmas feel mellow and comfortable.
Or maybe Ilkley have simply filled this beer with my ex girlfriend’s father’s homegrown.
Whatever’s going on in here it works and it’s delightful and, oh look, a shiny thing.