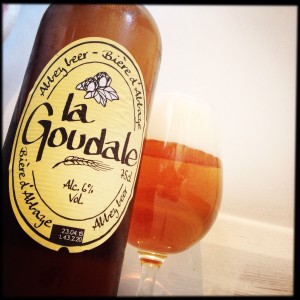 A good enough looking bottle of beer from Aldi, the Abbey Ale poured with a sweet honey bread smell and a nice foamy head.
But as I got my nose stuck in I found a slightly unpleasant burned hair smell lurking under the sweetness.
There’s a decent chewy caramel in here and some leafy green herbal hops, but by the third or fourth mouthful La Goudale becomes so overly sweet I began to wonder if I’d make it to the end, and so I had a peek at the ingredients which lists fructose, dextrose and sugar.
That’s a lot of sweetener right there.
Someone mentioned on Twitter that they’d not seen this in their local Aldi and my immediate reaction was to tell them to buy a bottle of Leffe Blonde and stick a couple of spoons of sugar in it.
Yup, that in a nutshell, says it all about La Goudale.