Beer labels. Love them? Hate them? Indifferent? There are certainly those that are anchored in time, those (like Partizan) that are designtastic and those that push the envelope of acceptability in 2014 Britain – busty barmaids are so 1970s and we are all learning what that era was all about, with a succession of “celebrities” sent down for their sexual misdemeanours. But this is a beer blog right? What am I wittering on about…… 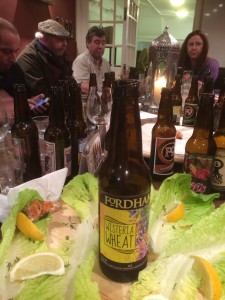 Well, the story goes like this. Monday evening, sitting at my laptop, one ear on the wife (she would say less), one on the TV. An email arrives from Mr. CAMRGB – do I want to represent said organisation at an industry “do” in London on Thursday? Now I have been bought plenty of corporate booze in my time. Usually by sales folk wanting my employer’s money. But beer from a brewery? This is new territory. What could I say? Other than “YES PLEASE!!” Visions of an evening in the company of Brewers from Kernel, Partizan or maybe Tap East start floating through my mind. The chance to meet Blogging Royalty maybe?

Then the invite proper arrived.

I don’t know about you, but there are breweries that I immediately associate with bin ends and discount stores. Breweries, mostly macros, making stock beers to sell for £1.19 to those who fancy something in a clear glass bottle with a hint of flavour amidst the chemicals. Now I am not saying that this brewery is in that market, but all my experience of it to date has been of run out cases from on-line retailers eager to off load ageing stock. Ladies and Gentlemen, let me introduce you to……Fordham. I will admit that my heart sank. You must have seen the bottles, dreary things with pretty dreary beer inside, my induction into the inside world of the brewing industry was to be with the UK distribution channel of a US bit player. Thank you Mr CAMRGB! 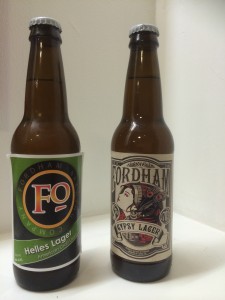 So I did consider finding an excuse. Thursday was, after all, a day of floods and storms. But the train to Euston was barely five minutes late. The tube was shafted, but after a couple in the The Euston Tap the bus carried me to Kensington and the HQ of Fordham’s UK distributer, Heathwick Ltd. Funny little place, part office, part dining room. Looks like a shop from the outside, a shop from the times of Dickens rather than an Apple Store.

And the industry do is in full swing. A gaggle of folk sat at a large table, bottles both empty and full on the table in front of them. A range of nibbles. Introductions are made. I catch very few names and recognise fewer of the companies that these guys work for. I have a feeling that that is bad. Maybe I shouldn’t be here? I have to explain that CAMRGB is not CAMRA. We are a tad smaller but probably more fun. And no, I am not Mr CAMRGB, I am a stand in as all the real candidates are probably at the British Guild of Beer Writers annual dinner that is on this very evening at a nearby venue (not going to meet any of my blogging heroes tonight then). 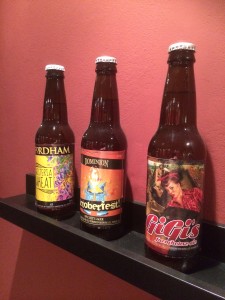 To the main event. The dreary beer. OK, I have rather telegraphed this, I admit, I am very sorry, beer writing is a hobby, not my profession. The first dreary beer was not. Neither was the label. Ram’s Head is a fairly recent launch and is a big ballsy West Coast style IPA, which, at 7.4% is probably not the ideal start to the evening. But it is good! I could tell you what it tastes like but, to be honest, that is not my forte. Try it and see, I doubt that you will be disappointed. The label? Ever seen a Dodge Ram 3500 in your fear view mirror? That is what it looks like. Minus the truck. You wouldn’t call it funky, it is something of an etching, and almost demonic. Nothing dreary about either beer or the labelling then.

Next? Hop Mountain Pale Ale. Red ale. 6%. From sister brewery Old Dominion. I have had this before and it remains a decent tipple. Follow it with Oak Barrel Stout. Another 6% effort – God Bless America, no fear of ABV there. Decent beer again, I do feel a bit concerned that there is no common theme or sometimes even an obvious family feel to the labelling. There is a consensus in the room that they might not be “recognisable” on a shelf or in a fridge. 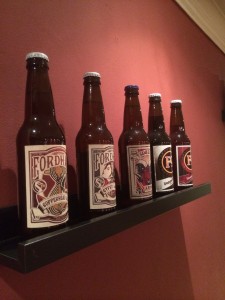 Gigi is a Belgian farmhouse ale. Not as mental as some Belgian Belgian Farmhouse ales. Not quite of the farmyard. It lacks the essence of straw soaked in cow wee. Again, it hits the spot. There are those who will find the labelling at the edge of acceptability, it is historically of a time when farm girls were glamorous and painted on the side of B17s flying out of English airfields on nightly trips to Germany. I like it, to be honest.

Conversation turns to marketing. Seems that Fordham is considered transitional, for those that have drunk stock beers but want to try something a bit different. Old Dominion are “Craft”. Seems to work, although Ram’s Head could sit in either camp, the Fordham Wisteria Wheat is un-challenging. A banana Hefeweizen treat that might well end up with you on a trip to something more extreme.

And bang. We are out of time. It has been interesting. I admit to not trying the re-labelled “old” beers. The new ones I rather liked. They will all look better on your beer shelf than before and they are far from the bin end bores that I remember. I hope that I get invited back.