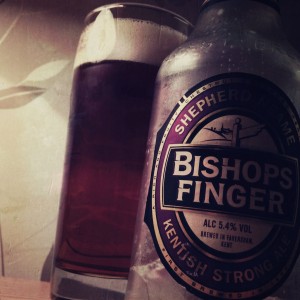 Right then.
I like the folks at Shepherd Neame.
They’re friendly and, most importantly, they’re open to criticism, take it on the chin and more than most, they appear to take it on board.
Why am I saying all this?
Well, they kindly sent me a bottle of Bishops Finger (shouldn’t there be an apostrophe in that name?) as they have rebranded it to fit in with their range of historic brews – India Pale Ale, Double Stout and Generation Ale amongst others – and the labels look very nice indeed.
But there’s one problem.
And for me it’s a BIG problem.
Unlike the other beers Shepherd Neame have decided to leave Bishops Finger in clear glass, and I hate clear glass with a passion.
In my eyes it’s used by people who don’t care about their beer, but do care about how their product looks on the shelf.
As a result I’m not going to review the beer because the bottle I’ve been sent will have been stored in the dark and could well have only just been bottled, whereas the one you’ll buy may have been on a shop shelf for weeks and therefore be a light struck monstrosity.
So, why didn’t they put this into brown bottles to match the range that the press release tells me that Bishops Finger is now a part of?
Fortunately I know the folks at Shepherd Neame, unlike some of the other larger breweries, won’t take this all to heart and take me off their Christmas list.