The Hop Studio There Is Noël In Christmas (4.5%) 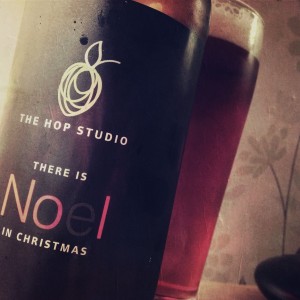 We’re not even into Christmas week and I’m already sick to death of Christmas beer that includes cinnamon and nutmeg and the like.
As it goes, this isn’t a particularly bad beer, but sadly it suffers from being yet another spiced Christmas beer in a long line of spice Christmas beers I’ve been drinking recently.
If you were to only have this one over the festive period you’d really enjoy its lightly mulled spiciness.
But amongst all the others sadly it’s just another beer with a bunch of Christmas stuff chucked in.