So this is Christmas, and what have we done?
Drunk beer, that’s what.
Along with a small gang of Beer Writers, I was fortunate enough to be sent a bottle of Christmas Ale by Shepherd Neame.
After a bit of a natter about it on Twitter, a few of us decided to gang up and review the same beer and publish all the reviews as one article.
It seemed an interesting way of getting a really rounded view of a particular beer.
Maybe all our reviews would be vastly different, maybe they’d be weirdly similar, maybe we’ll just end up arguing after the fact.
So, deck your halls with bows of holly, grab yourself a glass of eggnog and put the following words together to decide for yourself what this bottle of beer is all about. 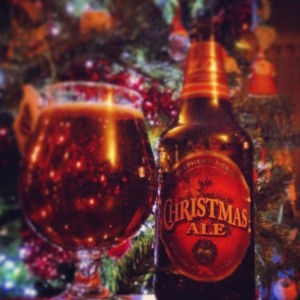 Steve from The Beer O’Clock Show (@BeerOClockShow)
Christmas beers. Festive ales. You either love them or hate them. Personally, I get a bit fed of the the ‘festive spiced’ flavours overwhelming all of the other ingredients and just wish a brewery would concentrate on making a decent winter ale rather than more novelty tosh.
Shepherd Neame’s Christmas Ale definitely falls into the category of a decent winter ale.
At 7% ABV it’s a fairly big, bold beer and you are hit straight away with a big, boozy, earthy aroma.  It pours a lovely dark amber colour, and has instant flavours of malty, toffee biscuits. This continues throughout the beer and the hops leave a subtle but noticeable spicy aftertaste. There’s a really enjoyable warming feel to the beer also and any ‘Christmas spices’ that have been included stay firmly in the background where there should be.
All in all a really decent Christmas Ale/Winter Warmer and one that I would recommend to others. 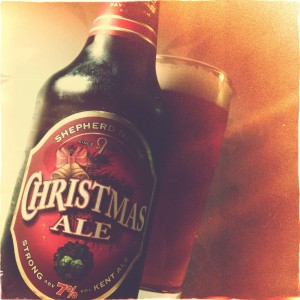 Simon from CAMRGB (@CAMRGB)
Shepherd Neame’s Christmas Ale opens with the smell of sandalwood and forest floors, and I took a big swig to find treacle toffee pudding, brandy snaps, just a little steamed greens and a big spiced bread and butter pudding that’s warm and boozy.
And I found hops.
Nice sharp bitter hops.
Crystallised lemon rind, orange peel and mace, sherbet kids’ sweeties and jelly liqueurs.
What pleases me no end about this beer is that I’ve found one that tastes festive and drinkable without the clichéd cinnamon, ginger and All Spice being chucked into the brew, a beer that tastes and feels good. 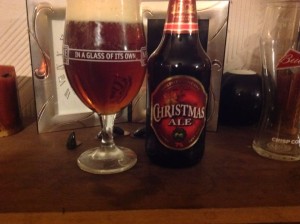 Nate from Booze, Beats  Bites (@NateDawg27)
Look:
A very nice shade of ruby with a fluffy white head. You can actually see through the beer quite well.
Aroma:
Raisins on toast, with oh so much brown sugar sprinkled on, along with a dash of cinnamon. Starting to fear this will be too sweet for me.
Taste:
It’s basically like a Christmas pudding in a glass and it is about as sweet as. Luckily though, that sweetness is balanced out with a nice bit of spice. Not stupidly spiced like some Christmas beers, but it comes through.
Mouthfeel:
Very well carbonated, yet quite smooth. Can drink it very easily.
Overall:
Fair play, it’s a decent Christmas beer. Probably wouldn’t drink it too often due to all of that sweetness, but I definitely know a lot of people who I will be recommending it to!

Thanks To Shepherd Neame for providing the beer and to Steve of The Beer O’Clock Show and Nate of Booze, Beats & Bites for taking part.