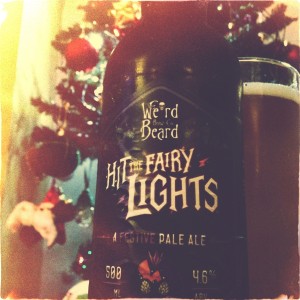 I like Weird Beard very much, but this isn’t their best.
A Pale Ale with oranges and star anise, I can barely taste either.
What I get is a decent, if slightly harsh, Pale Ale packing a big hop hit that’s lemon juice sharp, bitter and dry, and a malt that struggles to find its feet and so only just shows its caramel heart.
Right at the back there’s the hint of oranges, but they’re so barely there that they could just be a rumour, and the star anise they wear on their lapels is blunted and dull.
A shame, but not a catastrophe, and I’m still looking forward to what these chaps might do in 2014.