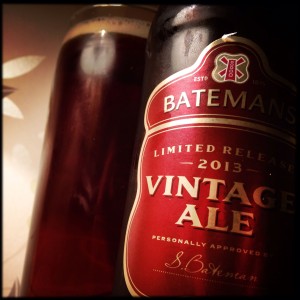 Last year’s version of this was a pretty dire affair packaged half heartedly in a box complete with spelling mistakes.
This year I can’t spot any typographical errors, but equally I can’t find any improvement in the beer.
It pours a decent enough chestnut red, but has that same unpleasant vegetable matter odour as its predecessor.
There’s a hint of vinegar sloshing about under the prune and digestive malt that adds to the rather harsh chemical like alcohol burn on the inside of your cheeks.
There are some crunchy red hops and a finish that’ trying its best to be dry and bitter, but it’s undermined by the nasty nail varnish remover that’s wandering around all over this beer.
I won’t be buying the 2014 release that’s for sure.