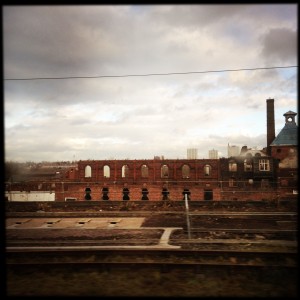 This weekend saw me travelling over to Shropshire to celebrate my birthday with a few close friends and drinking partners.
The plan was to spend a comfortable afternoon wandering around Shrewsbury and having a bit of a laugh.
I travelled over from Leicestershire on Friday afternoon, a bottle of Rogue’s Dead Guy and some home made sandwiches to keep me company, managed to get a decent photograph of the old Mitchell & Butler brewery buildings as my train pulled out of Wolverhampton station, and arrived in time for tea and a natter with my mum.
Not a bad start to the weekend, the weather was cold but pretty dry and I thought ahead to my day out.
And then Saturday came.
It was raining when I woke up at four in the morning and it was still raining when I woke again at six thirty and decided to get up.
And it carried on raining.
And raining.
I had visions of trains over to Shrewsbury being cancelled, of text messages saying people couldn’t make it, of a complete wash out. 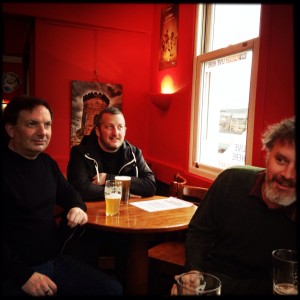 But my one o’clock train arrived promptly and I walked into The Salopian on the edge of the Severn to find everyone there already, said a quick hello and bought a bottle of Brouwerij Oud Beersel’s Oude Geuze Vieille (6%).
After initial hellos and how are you’s we found a corner of the Salopian large enough for us to all sit together and the conversation flowed with the beer.
I followed the Geuze with a very good Saint Ceceliac (4.8%) which is an American Wheat collaboration between Salopian and Celt Experience, and that was quickly followed by a round of Flying Dog’s Wildeman Farmhouse IPA (7.5%).
The afternoon was shaping up nicely and we put our coats on to walk the rainy few hundred yards up to Shrewsbury’s indoor market area in order to visit Les Crêpes De Sophie. 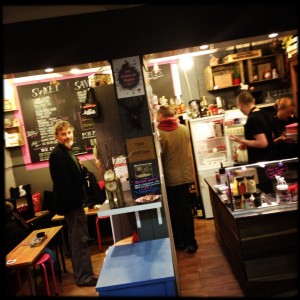 I had heard good things about this tiny establishment tucked away on the market’s first floor, it’s owned and run by a CAMRGB member and his French partner, and it took my breath away.
With seating for a dozen people at a push, the food is excellent and reasonably priced, and the beer selection ranges from Summer Wine Brewery to the almost mythical Westvleteren 12.
We ordered some food and sat down with drinks.
A couple of our party opted for the Westvleteren and seemed to like it quite a lot.
I decided to keep my bottle for an evening in and instead opted for Summer Wine’s Diablo (6%), which I’d not had for some time and which worked well with my Hot Chick – a crêpe filled with chicken breast and chillies.
One of our number noticed the beer fridge had a few 330ml bottles of Brasserie Dupont’s Saison (6.5%) and announced he’d never tried it.
So we bought all the bottles they had and shared them out, and I was instantly reminded why it had been one of my very favourite beers when I was first discovered this style.

Out of the corner of my eye I could see Jake from Salopian Brewery doing something at the counter, and then suddenly a very large bag was placed in front of me.
I was told that this was a present from the brewery to celebrate my birthday and to thank me for my support, but that I must only drink it to myself and in one sitting.
I opened the bag and was confronted with the most colossal bottle of Abbaye De Rocheforte 8 (9.2%).
A magnum no less.
A litre and a half of beery goodness.
I was stunned, and very pleased.
And maybe a little bit frightened by its enormity.
By this time it was getting near closing time for the market and so we bade our farewell’s and wandered over to the Three Fishes for a final drink and there on the bar, smiling at us all was Darkstar Brewery’s Hophead (3.8%). 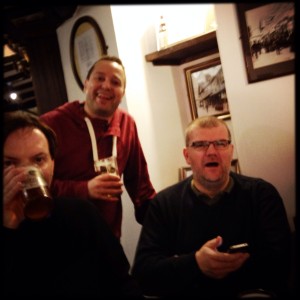 We ordered one each and discussed what a brilliant place Les Crêpes De Sophie was, promising to visit it again soon.
And then time was up.
It was early evening and we all had places to go and people to see.
Shrewsbury has always been a brilliant little town with lots to do and plenty to drink, but now with the re-emergence of the market right in its centre and with the jewel of the crêpery hidden at its heart, it is proving itself to be an absolute must for a day out.

Thanks to Jake (@SalopianBrewery) and Jake (@jakeperks), Richard (@Richard_Pigg), Paolo (@PaoloFernley) and Darren (@circa79pritchy) for joining me for my birthday drinks, and to Sophie and Matt (@lescrepesdesoph) for their hospitality.