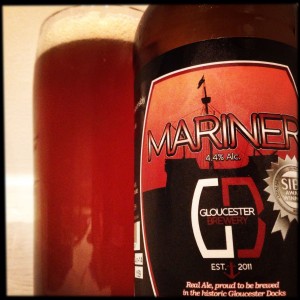 I may be entirely wrong but this beer tastes and smells as though it’s full of Citra.
That’s all well and good except for two things.
Firstly, and somewhat pedantically, the label says that Gloucester Brewery use, “locally sourced ingredients,” and secondly, when Citra is used well it can be super – á la Kernel’s IPA Citra – but when it used badly – without a strong enough malt to balance it out perhaps – it can taste thin and bitter and soapy and smell of cat wee.
Sadly Mariner is the latter.
This is a watery weak beer with a nasty sharp, almost sour, lemon washing up liquid flavour that batters any malts that may be in here into weeping submission.
Regarding the “locally sourced” tag, if I’m right and this is Citra in here then I can only imagine that it was sourced from a local hop importer, if I’m wrong then I take everything back and Gloucester Brewery have worked wonders with Fuggles.

Note: I have since found the hops here are Bobek and Cascade. So maybe the flavours noted above are more to do with any strong hop variety not balanced well with the malting in a beer (thanks to @1970sboy for info).

One Response to Gloucester Brewery Mariner (4.4%)